“Death is for other people, dear.” – The Magician’s Apprentice (Doctor Who)

So what will you be thinking about the day before you die? Your family? Your friends and your enemies? Your successes and regrets? What you put in your will?

Sorry for the morbid opening, but that’s the mindset we find the Doctor in this week, as we rejoin the Time Lord for the first episode of Series 9.

Davros, the creepy/kinda ridiculous old scientist who invented the Daleks, is on his deathbed. He sends out a message to the Doctor that “Davros knows. Davros remembers.” This is seemingly a reference to a time when the Doctor, on one of his wanders through time, stumbled across a young Davros in a life-or-death situation and offered to help the boy, but then ran away when he learned the kid’s name, seemingly leaving him to die.

Hearing Davros’s message convinces the Doctor (for reasons that aren’t totally clear to me) that he will also die tomorrow. So he sends his high-tech Time Lord will to Missy and heads off to England in the 1100’s to have a party/eulogize himself/drive around in a tank and improvise stadium rock concerts.

Showing the Doctor approaching and accepting what he thinks will be the last day of his life is a fine and interesting idea for a story.

The problem is that it kinda loses its impact, since we’ve seen at least two pretty similar stories in the last few seasons: David Tennant’s last year on the series was a series of hour long specials where he went through the stages of grieving after hearing about his own pre-ordained and upcoming death. And the back-half of the Matt Smith run dealt with him visiting his own grave in the future, and then slowly approaching the battle that would lead to his future-death.

So “The Doctor prepares for the end of his life” isn’t a bad or uninteresting story to tell, but c’mon can we at least wait longer than two years before we go back to that well again?

(Also, this is still theoretically a children’s series, right? Let’s dial back on the memento moris a little bit!)

“The Magician’s Apprentice” is an episode seems to really be emphasising the words “friend” and “enemy”.

Davros sends his snake-intern to track the Doctor’s friends. Missy and Clara argue over whether the evil Mary Poppins could ever really be the Doctor’s friend. We hear that a Time Lord’s will is traditionally sent to their closest friend. Missy is offended that the Doctor considers Davros his arch-enemy. And the final cliffhanger is based around the line “I’m going to save my friend.”

So friends and enemies are pretty clearly being set up as our Sesame Street-style words of the day for this episode.

So let’s start with the Doctor’s friends – that’d be Clara and Missy. Clara doesn’t get a huge amount of new stuff to do here, we’re mostly re-establishing where she is this year: still a cool English teacher, and on her off hours a cool, confident consultant called in by UNIT/the Prime Minister whenever weird stuff starts happening.

Most of the focus in Clara’s scenes are on how well she knows the Doctor and how deep their friendship is. There’s not much room besides a throw-away line to explore how she feels about the death of her boyfriend last year, and the fact the woman who (kinda) killed him is still strolling around quipping and singing opera solos. (Is that what you call them?)

Starting out as kind of a generic, barely-there sketch of a character when she partnered with Matt Smith, in Series 8 last year, Clara unexpectedly became one of my favourite characters. Or at least one of the ones I find most interesting.

I like that she has two big character traits that you don’t normally associate with Doctor Who companions: she’s a liar and she’s a coward (or at least not naturally brave.) This characterisation of Clara hasn’t been all-that consistent, but when they’re there, these are the aspects I find most interesting.

And since the Doctor has also occasionally been described as a “liar” and a “coward”, it makes sense for him and Clara to have a more equal, best-friends-like relationship than the usual unequal power dynamic between Doctor and companion. 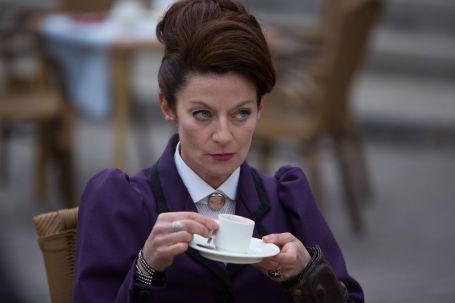 Then there’s the Doctor’s other friend, the returning Missy, who explains the fact that we saw her die last episode with a quick “Not dead. Back. Big surprise. Never mind!”

This episode builds on an aspect of missy that I really liked in her last appearance: that she genuinely thinks of herself and the Doctor as really good friends, and all the killing and crazy plans for world domination are just her going along with a game they’re both playing.

And since the Doctor sends his will (“to be delivered, according to ancient tradition, to his closest friend on the eve of his final day”) to Missy, maybe she’s right?

As we know by now, Missy (who used to be The Master) doesn’t fit comfortably into binary boxes and categories, whether that be Male/Female or Friend/Enemy. Is she the Mistress or the Master? Is she the Doctor’s friend or his enemy? Well, both.

She’s in the middle of the episodes two poles, between Friend (Clara), and Enemy (Davros, the Daleks). She gets all the signifiers of a friend (witty banter and affection for the Doctor, him sending her his will) but also lots of markers of an enemy/villain (murdering a young father on a whim, taunting Clara over her dead boyfriend, her plane bombs).

One aspect of “The Magician’s Apprentice” I really liked was the subtle connections the script draws between the Doctor’s enemies and other famous big name bad guys (both fictional and otherwise). There are shades of modern baddies from history and popular culture like Hitler, Sauron, Voldemort and Bin Laden* to Davros and Missy in this episode.

*Bear with me on this one….

Missy’s big entrance, freezing all of the world’s airborne planes, with the implied threat that they’ll be launched at the world’s nuclear plants and fault lines, is pretty obviously drawing on imagery related with 9/11. (See also, Clara’s worried line “What could you do with four thousand flying bombs?”) 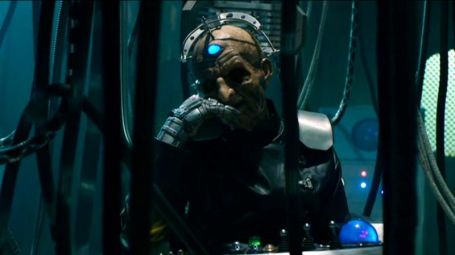 Davros, meanwhile, has started calling himself “the Dark Lord of Skaro” and sending out a hissing, robed messenger (made out of snakes) to run errands for him – pretty clear borrowings from Voldemort and Sauron’s style-books there.

And then of course there’s the plot’s inciting incident: that the Doctor at one point had the choice to save or abandon the young boy version of Davros – a story idea which calls to mind the old “Baby Hitler” thought experiment. You know: “If you could go back in time and kill Hitler when he was a baby, would you?” 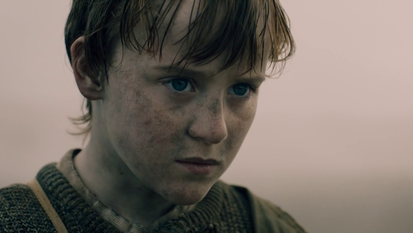 Or, as presented here, in an audio clip from the 70’s Tom Baker era of the series:

“If someone who knew the future pointed out a child to you, and told you that that child would grow up to be evil, to be a ruthless dictator who would destroy millions of lives – could you then kill that child?”

So in the past (including in that old Tom Baker episode) the Doctor has obviously come down on the side of mercy and compassion and not killing children. Even his opting out of the choice at the beginning of the episode and running away from Young Davros is presented as a shameful moral failing.

But by the end of “The Magician’s Apprentice”, after the (seeming) deaths of Clara and Missy, he has majorly changed his position: zapping back in time to execute the boy Davros so that his friends will live. (While shouting “Exterminate!” no less, which seemed a little on the nose…)

I wonder where that’s going…

But that’s the trouble with these two-part episodes: this week, we can only talk about half the story.

All the stories themes and central ideas have been laid out: friends, enemies, regrets, facing the last day of your life, the limits of compassion and the Baby Hitler thought experiment.

I’m really interested to see writer Steven Moffat find some out-of-left-field way to tie all these ideas together, but right now it’s not really clear what point he’s trying to get at.

So, with that in mind, I’m going to try something new here and end this week’s episode rundown with a:

About the author: A lifelong TV addict since his first episode of Sesame Street, Cian Sheppard works as an English teacher in Poland and thinks you look very nice today.

2 Responses to “Death is for other people, dear.” – The Magician’s Apprentice (Doctor Who)